The Twentieth Century has been characterised as "The American Century," and, as it dawned, that must certainly have been the expectation, not only of many Americans, but also of a multitude of people who sought to become Americans. Economic growth in the United States was built on migration, both internal and international.

African Americans, whose grandparents had been slaves, and whose parents had fought in the Civil War, flocked to the cities of the north-east and the mid-west. Ships arrived daily at Ellis Island, bringing German and Russian Jews, Irish and Italian Catholics, all eager to build new lives for themselves. In just a few decades, the population of New York City grew from a few tens of thousands to 3.4 million in 1900.

American industrialists like Henry Ford were redefining the processes by which goods were manufactured; American bankers such as J.P. Morgan were revolutionising the ways in which enterprises were financed; American architects and city planners were reinventing the notion of the city itself; and African American musicians, taking advantage of new recording technologies, were writing a new soundtrack for a new century.

It was an era of almost unlimited hope for many people. "I will build a car for the great multitude," said Ford. "It will be large enough for the family, but small enough for the individual to run and care for. It will be constructed of the best materials, by the best men to be hired, after the simplest designs that modern engineering can devise. But it will be so low in price that no man making a good salary will be unable to own one, and to enjoy with his family the blessing of hours of pleasure in God's great open spaces."

Beneath the surface of all this hope, however, there was much poverty, social division and prejudice. In New York City, each community claimed its own patch of territory, and each had its share of criminal thugs to enforce their own brand of "justice" on the streets. Some of these thugs held public office, whether as town hall officials, policemen or firemen, and used it both to line their own pockets, and to lash out at minorities other than their own.

E.L. Doctorow's novel, Ragtime, is set in New York City between 1900 and 1916. At its heart is a very ordinary American family: a boy; his parents (the father owns a small business making flags and bunting); his grandfather; and his mother's younger brother. As the story unfolds, however, the lives of these fictional characters intersect with those of some of the most significant historical figures of their day: Ford and Morgan; the socialite, Evelyn Nesbitt; the magician, Harry Houdini; and the anarchist, Emma Goldman. 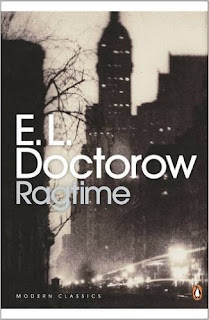 "There seemed to be no entertainment that did not involve great swarms of people. Trains and steamers and trolleys moved them from one place to another. That was the style, that was the way people lived. Women were stouter then. They visited the fleet carrying white parasols. Everyone wore white in the summer. Tennis racquets were hefty and the racquet faces elliptical. There was a lot of sexual fainting. There were no Negroes. There were no Jews ... Across America sex and death were barely distinguishable. Runaway women died in the rigours of ecstasy. Stories were hushed up and reporters paid off by rich families ... Apparently there were Negroes. There were immigrants. And though the newspapers called the shooting the Crime of the Century ... it was only 1906 and there were ninety-four years to go."

"One afternoon, a Sunday, a new Model T Ford slowly came up the hill and went past the house. The boy, who happened to see it from the porch, ran down the steps and stood on the sidewalk. The driver was looking right and left as if trying to find a particular address; he turned the car around at the corner and came back. Pulling up before the boy, he idled his throttle and beckoned with a gloved hand. He was a Negro. His car shone. The brightwork gleamed. There was a glass windshield and a custom pantasote top. I'm looking for a young woman of colour, whose name is Sarah, he said. She is said to reside in one of these houses."

"A while later, Younger Brother found himself in the Cooper Union down near the Bowery. The hall was hot, crowded to overflowing. There were lots of foreigners. Men wore their derbies though indoors. It was a great stinking congress garlicked and perfumed in its own perspiration. It had met in support of the Mexican Revolution. He hadn't known there was a Mexican Revolution. Men waved their fists ... Finally Emma Goldman got up to speak. Of all the orators she was the best. The hall went quiet as she described the complicity of the wealthy landowners and the despised tyrant Diaz, the subjugation of the peons, the poverty and starvation and, most shameful of all, the presence of representatives of American business firms in the national councils of the Mexican government."

The narrative voice blurs the distinction between fiction and non-fiction. Dialogue is used only sparsely, and yet the characterisation is rich. We see the seething city through the eyes of the family members, and through the eyes of  those who cross their paths: a poor Jewish immigrant desperate to secure a better future for his daughter; a black musician who buys into the American Dream only to have his illusions shattered; the idealist, Goldman, who puts everything into her own, very different dream of an alternative future; even the eyes of Ford and Morgan, as they build, for better and/or for worse, the world in which we all now live.

Mark Patton's novels, Undreamed Shores, An Accidental King, and Omphalos, are published by Crooked Cat Publications, and can be purchased from Amazon. He is currently working on The Cheapside Tales, a London-based trilogy of historical novels.
Posted by Mark Patton at 05:05