A History of the World in 50 Novels. 21 - "The Abyss," by Marguerite Yourcenar

In a very real sense, the 16th Century saw the birth of the modern world. As Portuguese, Spanish and British navigators circumnavigated the globe, the map of the world was gradually metamorphosing towards its modern form. The rapid growth of mercantile capitalism opened up new trade routes to the east and to the west. 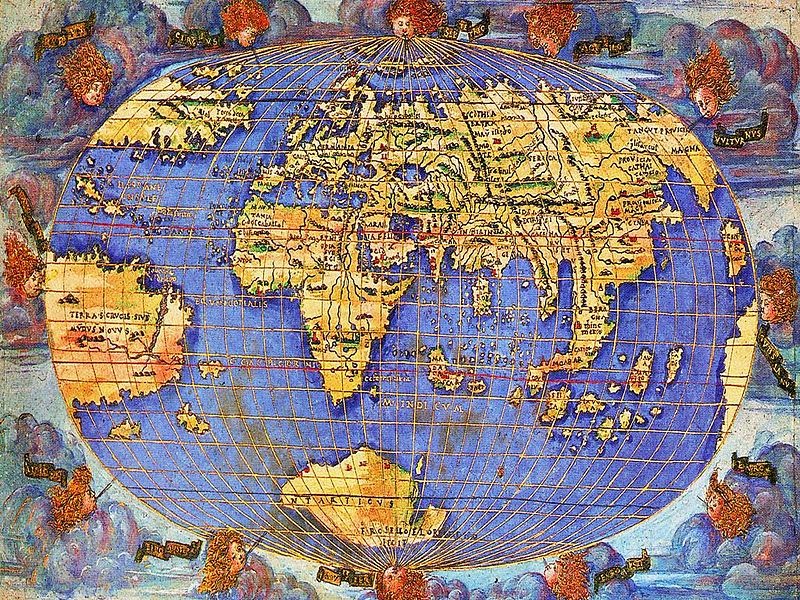 Francesco Rosselli's map of the world, 1508 (image is in the Public Domain). The eastern coasts of Brazil and Newfoundland are shown, as are the Caribbean Islands. The "Fool's Cap Map of the World," 1580-90 (image is in the Public Domain). The western coastlines of North and South America can now be seen.

In the field of ideas, Humanist scholars re-engaged with the art and literature of classical antiquity; Christian refugees from fallen Byzantium found work as tutors in the courts of Renaissance Italy, bringing with them not only a knowledge of Greek, but also works by Plato and Aristotle that had not been read in western Europe for almost a thousand years. The dogmas of the Catholic church were called into question, not for the first time, but in a far more comprehensive way than had ever been the case before, with Europe increasingly divided between Catholic and Protestant states.

There were, however, false dawns as well as true ones. The 16th Century was also the golden age of alchemy, combining elements of what we would recognise today as chemistry with elements of mysticism and (by modern standards) pseudo-science. 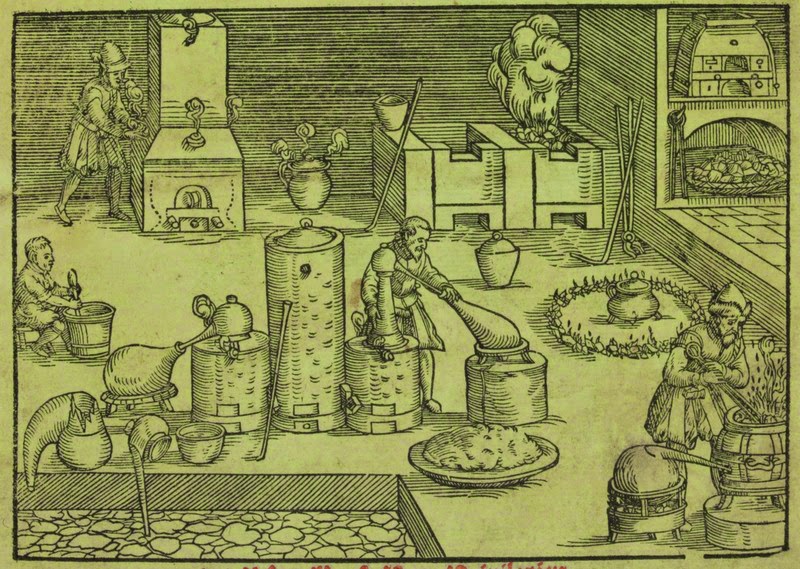 An alchemist's workshop of c1580 (image is in the Public Domain).

Marguerite Yourcenar's novel, "The Abyss," opens in Flanders with a chance meeting on the road between two young cousins. Both are leaving home to seek their fortunes in this rapidly changing world: Henry Maximilian Ligre, the legitimate son of a wealthy banker, to become a mercenary captain; Zeno, the illegitimate son of the banker's sister, abandoning a career in the church to learn the art of alchemy. 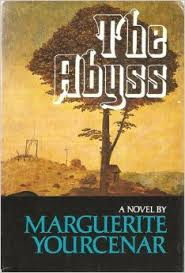 "I'm sixteen," proclaimed Henry Maximilian. "In fifteen more years we shall see if, perchance I'm a second Alexander. In thirty years we'll know if I'm equal or not to the defunct Julius Caesar. Why should I spend my life measuring cloth in a shop in Woolmarket Street? One wants to be a man ... I'm heading for the Alps."

"And I," said Zeno, "for the Pyrenees ... Look there," he said, pointing ahead, "beyond this village, other villages, beyond that abbey, other abbeys ... Beyond the Alps, Italy. Beyond the Pyrenees, Spain ... And farther, still, the sea and its vast expanse, Arabia and the Morea, India and the two Americas. Everywhere valleys where herbs may be gathered, rocks where metals hide, each symbolising a single moment in the Great Transmutation; everywhere magic formulas placed between the teeth of the dead ..."

More than a decade later, again by chance, the two cousins meet again in Innsbruck. Henry Maximilian has proved himself in battle (though not, it seems, as an equal of Alexander), and Zeno (the central, but not the only protagonist of the novel) has worked as an alchemist and physician, variously in Montpellier, in Paris, in Constantinople and in the service of the King of Sweden. Often he has travelled and worked under false names, his published treatises on alchemy having earned him the enmity of senior figures within the church. 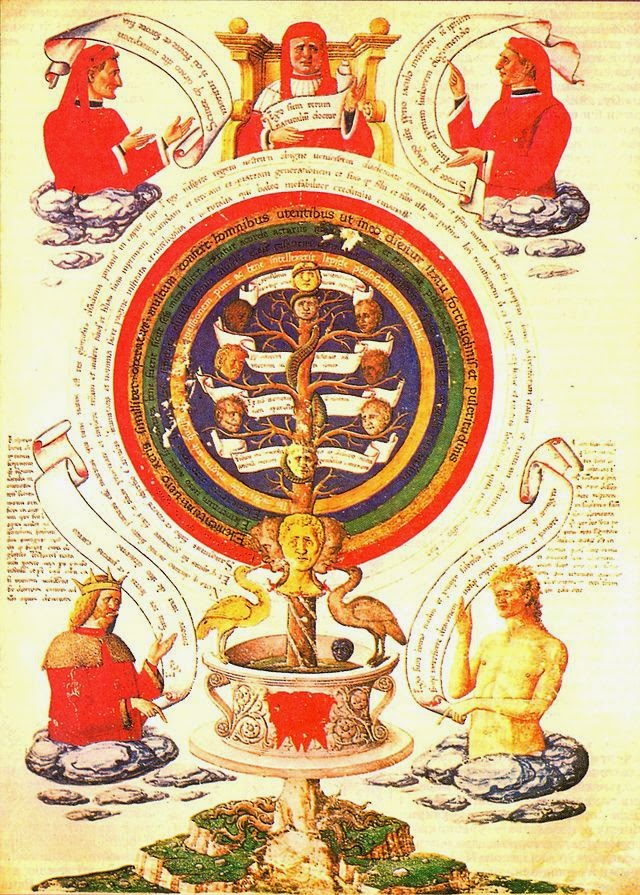 Alchemical treatise of Ramon Llull (16th Century, image is in the Public Domain).

Zeno lives in constant fear of torture and violent death, not only because of his alchemical investigations, and the "atheism" inferred from them, but also because of his homosexuality.

" ... one fear was ever present, that of torture. That men should be paid to torment their fellow men systematically was a hideous fact that never ceased to appal this man, whose calling it was to heal. Long since, he had steeled himself, less against the pain of torture (which in itself is hardly worse than what a wounded man feels when operated upon by a surgeon) than against the horror that such pain should be deliberately inflicted ... 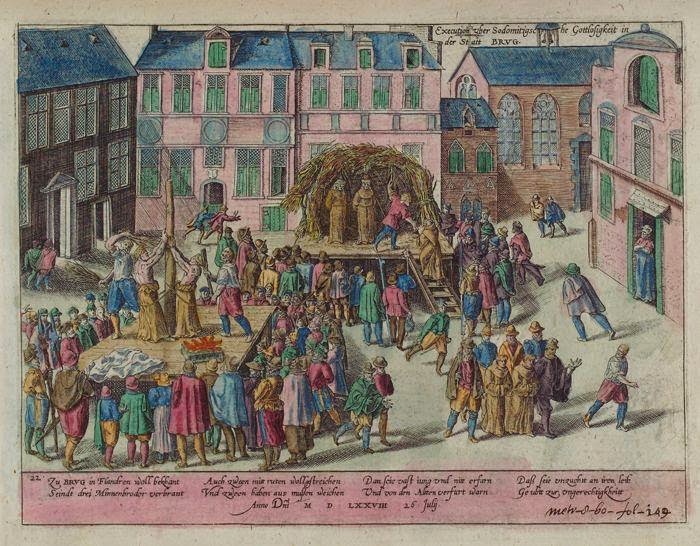 Bruges - the execution of monks found guilty of sodomy, 28th June 1578 (image is in the Public Domain). This real event features in Yourcenar's novel.

Yourcenar's narration in this novel follows a model that is, today, somewhat unfashionable - entirely in the third person, and fully omniscient. In some scenes we follow Zeno, and in others we follow one or other of the minor characters (we follow Zeno's step-father, for example, into the 1534 Anabaptist rebellion in Munster). The book is based on meticulous research, over many years, and Yourcenar certainly does not reveal everything she knows. The reader is left to join up many of the dots, but I do not know of a novel that better evokes the spirit of Europe in the first decades of the modern era.

Mark Patton's novels, Undreamed Shores, An Accidental King, and Omphalos, are published by Crooked Cat Publications, and can be purchased from Amazon UK or Amazon USA.