Every so often one opens a newly published book and discovers, to one's surprise, that someone else has been thinking along the same lines as oneself. This happened to me, most recently, when a review prompted me to buy a copy of Francis Pryor's Home - A Time Traveller's Tales from British Prehistory (Penguin). Although I have long been aware of Pryor's archaeological work in the fenlands of East Anglia, our professional paths intersected only at occasional conferences. We both studied Archaeology & Anthropology at Cambridge (not at the same time), but our careers then diverged, he as a professional field archaeologist, I as an academic.

Francis Pryor and I have both produced our share of conventional archaeological monographs, but Home is not one of these, any more than my novel, Undreamed Shores, is one of them. We both reached a point, it seems, at which we saw the need for a different sort of engagement with the human past, through fiction in my case, and through a different sort of non-fiction in his.

"One of the aspects of archaeology that had irritated me," Pryor writes, "was what seemed like an obsession with object classification ... very few researchers seemed at all concerned with the human beings who made and used the things. There was even less concern with what the objects might have meant to people living at the time."

One of the enduring metaphors in archaeology is the "ladder of inference" set out by Professor Christopher Hawkes. Starting from the archaeological record, it is relatively easy to make inferences about prehistoric technology, somewhat more difficult to make inferences about prehistoric economies or social organisation, and almost impossible to make inferences about the belief systems or the emotional lives of people in the distant past. Often, as an archaeologist, I found myself tottering about on the top rungs of this "ladder" and, more than once, a colleague compared my arguments to the musings of a historical novelist. It was, perhaps, inevitable, that I would eventually rise to the challenge and actually write a historical novel. 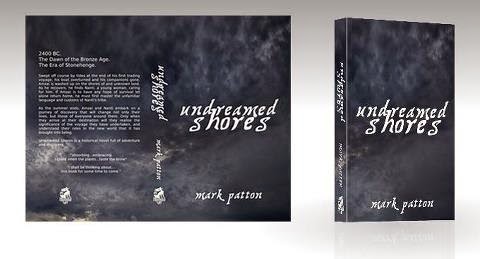 Pryor is especially critical of what he sees as a "top-down" approach to the past, focussing on "the acts of kings and queens." His starting point, instead, is the "simple notion that, even way back in prehistory, the idea of home life ... mattered to people," and that archaeology is uniquely well-placed to explore the domestic lives of ordinary people in the distant past, since they have left physical traces in the ground, even if they were very unlikely to have been documented by historians.

"My argument," he continues, "is that, in their quiet, unassuming manner families have always been the main source of ideas and innovation for local communities, whose emerging institutions ... have reflected this fact."

In his search for a "less hierarchical" view of the past, Pryor was inevitably going to come up against specific evidence for the existence of hierarchies. One such example is the burial of the "Amesbury Archer" ("Arthmael" in Undreamed Shores). This man was an outsider (chemical analysis demonstrated that he had grown up in central Europe), who lived in the immediate area of Stonehenge at just the time it was being built, and he was buried with many more grave-goods than most of his contemporaries. 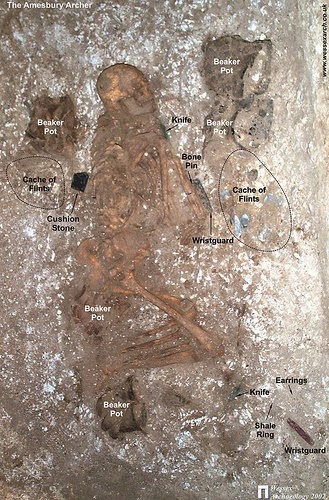 The burial of the "Amesbury Archer." Photo: Wessex Archaeology (reproduced with permission). 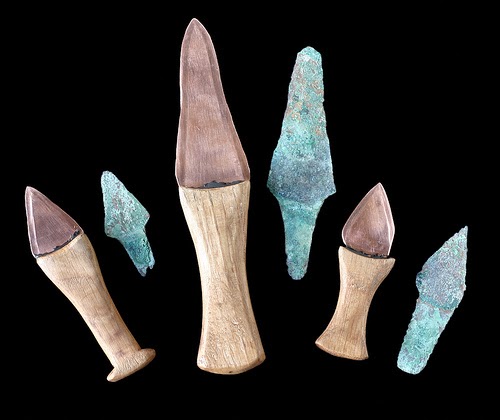 Copper knives from the grave of the "Amesbury Archer," some of the earliest metal objects found in Britain. Photo: Wessex Archaeology (reproduced with permission).

The Amesbury Archer was discovered in 2002, but similar discoveries have been made in the past, and were often seen as evidence for "invasions," in this case of the "Beaker People." Such ideas were already discredited when I studied at Cambridge in the 1980s, and we were taught to think in terms of social categories, the emergence of "Big Men" or "Chiefs." Throughout the 1990s my books and articles were peppered with such terms, but somehow they always seemed empty: they were, after all, categories, and I wanted to talk about people. The family, as an institution, was not a conscious starting point for me, as it was for Francis Pryor, but it quickly came to the fore when I sat down to write the novel. I wanted my characters to seem like real people, and real people have parents and grandparents, brothers and sisters, friends and rivals. 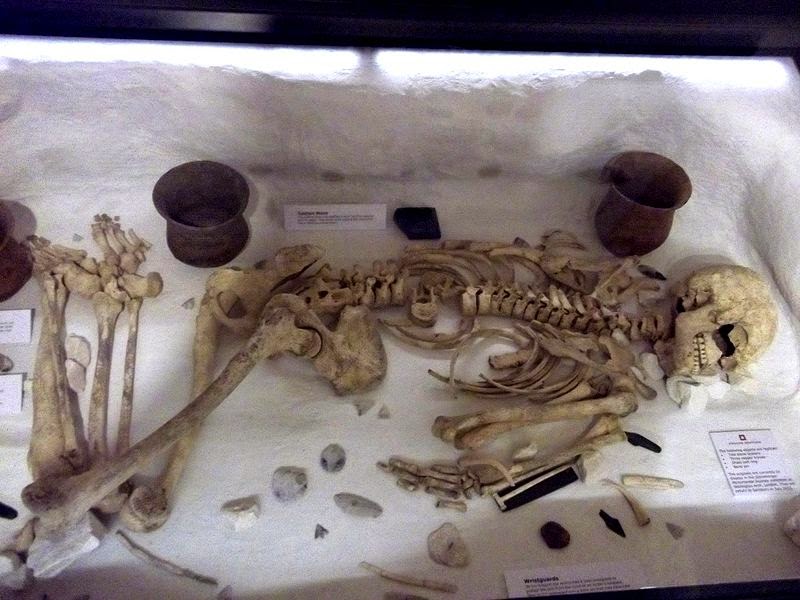 The Amesbury Archer, as displayed in the Salisbury & South Wiltshire Museum. Photo: Pasicles (licensed under CCA).

"I'm in little doubt," Pryor writes, "that there were new arrivals, but these people settled within, and were accepted by, local communities who would, of course, have benefitted from the new technologies of metalworking they brought with them."

I had not read this when I wrote Undreamed Shores, but I had certainly reached the same conclusion, and I went on to think about the circumstances of Arthmael's arrival and acceptance, the nature of his relationships with local people, and also some of the tensions that might arise. As an archaeologist, I tended not to think in these terms: I knew that I wanted to, but I also knew that the archaeological evidence could not provide answers to the questions I wanted to pose.

The grave of the "Boscombe Bowmen" was discovered in 2004, close to that the "Amesbury Archer," and the circumstances of this discovery (a mass-grave, with only one articulated skeleton) were so unusual that an element of the storyline immediately suggested itself. They too, became characters (Engus, Fodri, Eyan & Derog), enmeshed in their own networks of relationships.

The grave of the "Boscombe Bowmen." Photo: Wessex Archaeology (reproduced with permission).

I can certainly recommend Pryor's Home as a book which explores the prehistory of Britain in a new and exciting way: it is discursive, anecdotal and very personal, but it is also rooted in real archaeological evidence. The conclusion that he and I both seem to have reached independently is that, to have a full understanding of the human past, our own life experiences have to be admitted as evidence, something that "scientific" archaeologists find it very hard to do. Inevitably, that involves an embrace of subjectivity, which may lead us in different directions, but may also allow us to bring new insights to the sites and monuments that fill our landscape, and the objects that fill the cases of our museums.