A History of the World in 50 Novels. 9 "A Spoke in the Wheel," by Amita Kanekar

Urban, literate civilisation emerged on the Indian subcontinent from around 3300 BC. Although the writing of this "Harappan" culture has not yet been deciphered, aspects of the religious iconography have led some scholars to speculate that the religion practised in the earliest Indian cities was, in some way, ancestral to Hinduism. For 3000 years, empires in India waxed and waned: new religious traditions emerged, Jainism and Buddhism prominent amongst them. Siddartha Gautama, the historical Buddha, travelled through Nepal and India at some time in the 6th or 5th Century BC (some sources place his birth in 563 BC, others in 483 BC). 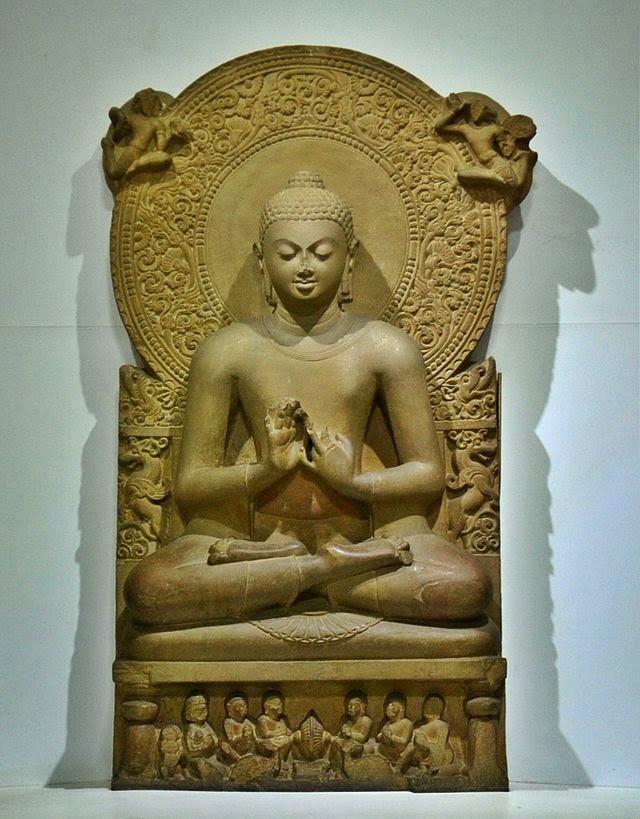 The balance of power within India was disturbed, in the 4th Century BC, by the incursion of Alexander the Great, and his Macedonian army. In the wake of this, a new empire arose in the north-east of India, its founder, Chandragupta Maurya, defeating Alexander's eastern successor, Seleucus I, in 322 BC, making himself the master of most of the subcontinent. The process of conquest was completed, in 261 BC, by Chandragupta's grandson, the Emperor Ashoka. His conquests, however, came at a high price: the Kalinga Wars left more than 100,000 people dead and, struck by remorse, the emperor embraced Buddhism and renounced violence (at least in theory). 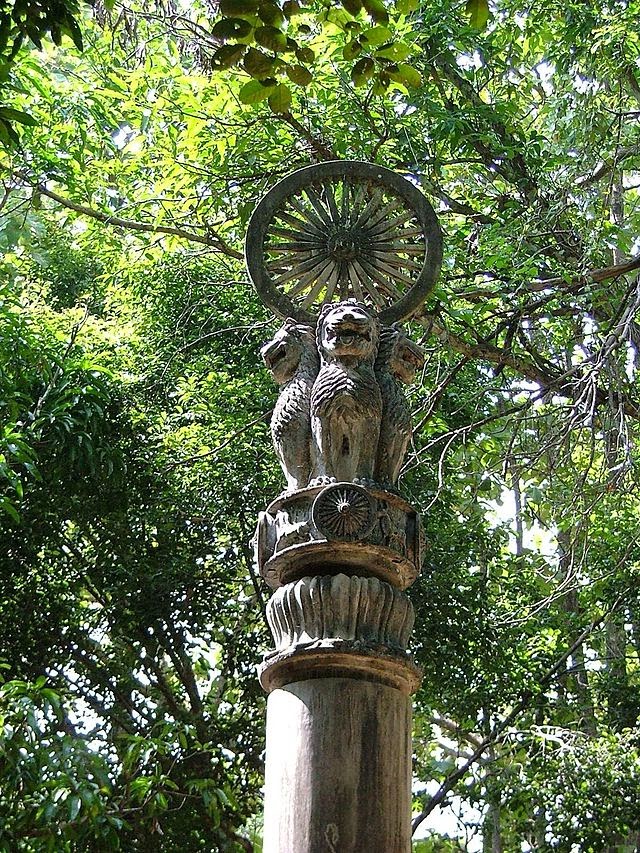 Pillar erected by Ashoka at Wat U Mong, Thailand (he erected many such pillars across his empire. Photo: Roychoudhury (reproduced with permission). 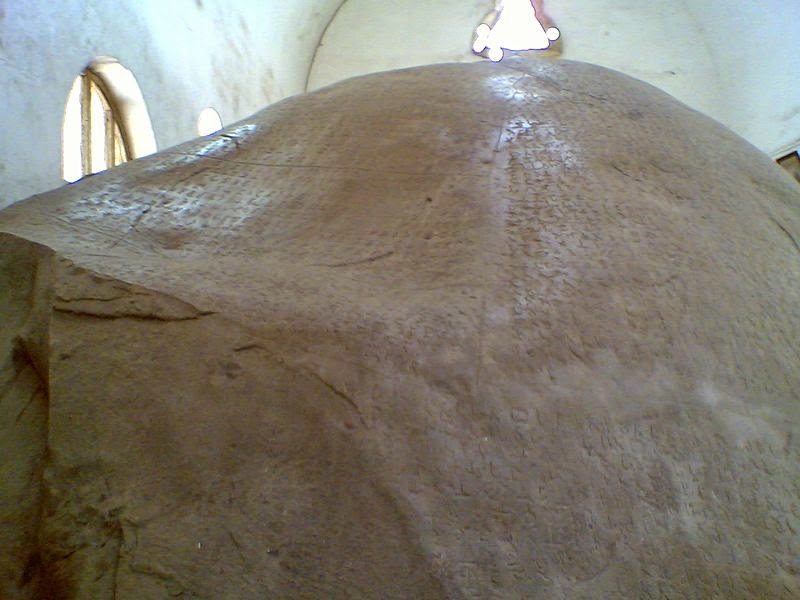 The Edicts of Ashoka, inscribed on stone at Junagadh. Photo: Jadia Gaurang (reproduced with permission). 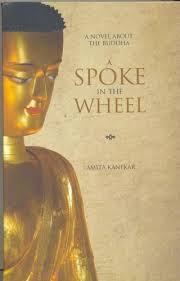 Upali, the main protagonist of A Spoke in the Wheel, is a (fictional) Buddhist monk, living in India in the 3rd Century BC, and working on a written biography of the Buddha (no such document exists - for reasons explained at the end of the book - the earliest surviving biographies of the Buddha date to the 2nd Century AD). Upali is also a refugee from the Kalinga War, with no reason to like or admire the Emperor Ashoka. The emperor, however, having embraced Buddhism, takes a keen interest in Upali's work, and summons him to a meeting:

"He was going to see the murderer of Kalinga. In the first months after the war, he used to imagine himself striding up to the Magadhe-Raja and slaying him, stabbing a dagger through the royal chest, cutting off the royal head, in revenge for the sorrow inflicted on all the harmless little hamlets Upali had known ... A civilisation had been destroyed, consciously and cold-bloodedly. And for what? Self-aggrandisement. Megalomania. Greed. All typical of the Mauryas and Magadh." 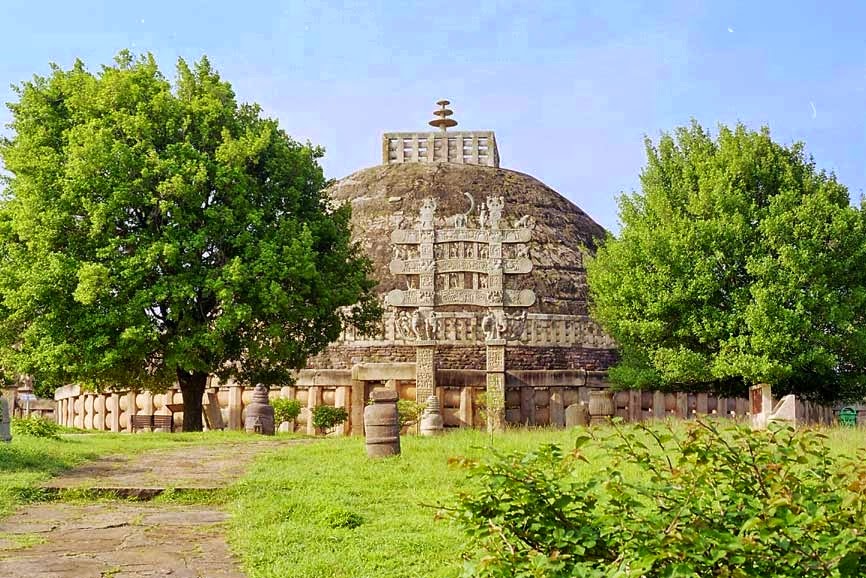 The Stupa of Sanchi, Madhya Pradesh, where Upali first meets the Emperor Ashoka (image is in the Public Domain).

The monastic community to which Upali belongs is torn between those who see the emperor's embrace of Buddhism as an opportunity to carry forward their beliefs; and others who fear that those beliefs cannot possibly remain intact if monks make common cause with those who have won power by the sword. When Upali finally comes face to face with Ashoka, he finds it difficult to hate the man, but equally difficult to believe that the emperor's understanding of Buddhism is truly the same as his own.

In the novel, the story of Upali's journey is interwoven with extracts from his uncompleted biography of the Buddha. He does not have much to go on: no writings, no eye-witness accounts (he is writing almost three hundred years after the Buddha's death), only stories handed down orally from one generation to the next (which often conflict with one another), and suttas (formulaic chants, believed to embody the teachings of the Buddha). At one point he is challenged by another monk:

"One Nagarjuna Upagupta, of Mathura, now joined in. 'I was very impressed, Thera, with the details. How do you know so much about Shakya life - politics, technology, military manners, and so on?'

Upali was rather relieved by the change of focus. 'Mostly from the suttas themselves. But a little, I suppose, from my own experience ... '"

Upali is, in modern terms, writing historical fiction, and his characterisation of the Buddha owes much to his own experience of, and outlook on, the world. He is concerned with how to live in the world, rather than with what lies beyond it; with morality rather than metaphysics. Both Upali and his imagined Buddha reject the formulaic religions of their times: with their blood sacrifices; their obsession with caste; and their focus on the supernatural. Both preach non-violence, kindness and tolerance, and strive to live up to these teachings in their own lives.

"Others insisted on believing in previous births, later births, and in various fates after death, but the Buddha remonstrated against this, too ... But sometimes he wearied of it all, especially when such ideas came from his closest companions ... 'It isn't strange, Ananda, that one person should die here, another there, and so on. But when each does so, that you should come to me to enquire about his or her future - that is really amazing!"

A Spoke in the Wheel is a novel about the early history of Buddhism, but it is also a book about the transition from oral to written tradition, and about the encounter between spirituality and temporal power. Reading it is an immersive experience in a culture that will be profoundly unfamiliar to many in the English-speaking world. Some of the characters have multiple names and titles; concepts are introduced without necessarily being explained; the reader encounters this culture as we might explore a foreign land when travelling independently, rather than on a tourist coach with a guide continually speaking over the real sounds of the place itself. That, of course, is what makes it a truly great read!

Mark Patton's novels, Undreamed Shores, An Accidental King and Omphalos, are published by Crooked Cat Publications, and can be purchased from Amazon UK or Amazon USA.
Posted by Mark Patton at 05:42