Who Were the Brigantes?

The Brigantes may not have been the wealthiest or the most powerful of England's pre-Roman tribes, but they certainly seem to have occupied the largest territory, extending from York in the north to Stafford in the south, and encompassing much of Lancashire, Yorkshire, Nottinghamshire, Derbyshire, Cheshire and Staffordshire. They were less "Romanised" than many of the peoples of southern Britain, and seem never to have minted coins. The uplands which they controlled, however, produced many of the resources that the Romans craved, including hunting dogs, wool, hides and furs. They may even have controlled Rome's access to the lead of the Deceangli of Flintshire. 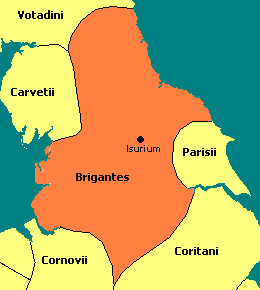 The likely extent of Brigantian territory in 43 AD. Image: Quijav, licensed under GNU. 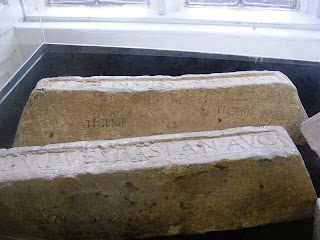 Lead ingots from Roman Britain, stamped with the imprint of Emperor Vespasian.

Their queen, Cartimandua (or possibly her father), may have been among the eleven rulers of Britain who surrendered to Claudius Caesar without a fight, and she is the only British ruler referred to as Regina in the Roman sources, implying that probably, in our terms, she was a Queen Regnant, and her husbands, though they may have held the honorary title of Rex, merely consorts. Her court was possibly at Stanwick (North Yorkshire), where the remains of a large fortified settlement have been uncovered, and in the vicinity of which a number of important finds have been made. 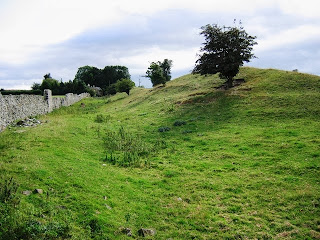 The ramparts of Stanwick. Photo: Graham Scarborough, licensed under CCA. 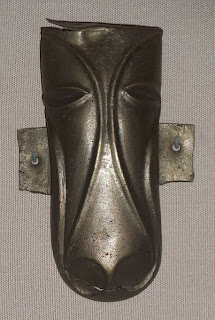 Bronze "mask" in the form of a horse's head, from Stanwick. Photo: Johnbod, licensed under CCA. 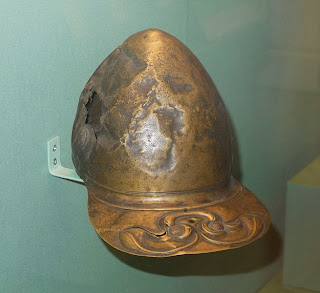 Cartimandua's first husband was a man named Venutios, and there seems to have been a long-standing tension between them, with Cartimandua adopting a far more stridently pro-Roman position than he did. When, in 51 AD, the Catuvellaunian prince, Caratacos, sought refuge at her court, Cartimandua handed him over to the Roman authorities, a move which seems to have incensed Venutios. Divorce followed soon afterwards and, with it, civil war among the Brigantes. Venutios's first serious rebellion, in 57 AD, was put down with Roman assistance, but he was more successful in 69 AD, against the background of the chaos of the "Year of Four Emperors."

Cartimandua had "tired of Venutios," Tacitus tells us in his Histories, "and given her hand and kingdom to his armour-bearer, Vellocatus ... The enthusiastic support of the people was at the disposal of the discarded husband, while the lover was backed by the cruel and lustful queen ... A revolt on the part of the Brigantes themselves brought Cartimandua face-to-face with extreme danger. That was when she appealed for Roman assistance ... our auxiliary cohorts ... rescued the queen ... Venutios got the throne, and we were left with the fighting."

Both Venutios and Cartimandua disappear from the record soon afterwards, and what happened to them remains a mystery. Tacitus's account, of course, is not an objective one (he had little respect for those native rulers who chose to ally themselves with Rome, and abject contempt for anyone who would consent to be ruled by a woman), and is certainly at odds with the way in which I have imagined the scenario in An Accidental King. It is doubtful that we will ever know the truth (if, indeed, there is one "truth" out there to be known). What is clear is that, by the time Agricola became governor in 78 AD, the Brigantes under Venutios were a dangerous enemy of Rome, to be subdued militarily, and so they remained into the 2nd Century AD. Juvenal, in his Satires has a Roman father exhorting his son to deeds of valour against them:

" ... Make sure the commander, Laelius, notes your uncombed head, your hairy nostrils, and admires the breadth of your shoulders. Demolish the huts of the Moors and the forts of the Brigantes ..."

Between 43 AD and 57 AD, the Brigantes under Cartimandua may have prospered through peaceful trade with the Romans, and were largely left alone by the legions, their commanders more concerned with the threat of rebellions in the south and west. After 78 AD, the Brigantes would feel the full weight of the Roman military machine bearing down on them.

Next week, I will be welcoming fellow author, Nancy Jardine, as a guest on this blog, to talk about the second volume of her Iron Age and Roman trilogy.