Chichester Harbour and the Roman Invasion of Britain

What do we know for certain about the Roman invasion of Britain? That it happened in 43 AD; that it involved four legions under the command of General Aulus Plautius; that the Emperor Claudius himself arrived at a late stage, accompanied by a number of elephants; and that he took the surrender of a number of British tribes at Colchester. That's about it.

Where did the legions land? Richborough in Kent is the answer most often given, and supported by the evidence of a substantial fort and supply base, ditches that may have protected a beachhead and the presence of a substantial triumphal arch. The most detailed account is that given by Cassius Dio (written 150 years after the event), and it is certainly consistent with a march west and north, subduing the Cantiaci, the Trinovantes and the Catuvellauni, with key battles at the crossing points of the Medway and Thames. That, almost certainly, is part of the story, but is it the whole story?

The beachhead protected by the fortifications at Richborough is about 700 metres in length. Was that really sufficient for the disembarkation of the estimated 45,000 men and 15,000 horses and mules that made up the invasion force? Cassius Dio tells us that the invasion was prompted by the flight to Rome of Verica, the king of the Atrebates/Regnenses (probably a single people by that point in time), under pressure from Caratacos of the Catuvellauni. This has led some to suggest Chichester Harbour as the landing point for at least part of the invasion force.

The important point about Chichester Harbour is that it was on friendly territory. A Roman force marching north through Sussex and Hampshire, with Verica or Cogidubnus (who may have been Verica's son) riding alongside its commander, might well have been viewed as an army of liberation. Silchester, which Caratacos had recently seized, could probably have been taken by a relatively small force, which could then have marched on to the Thames, joining up with Plautius's much larger force that had fought its way through Kent. Crucially, they would also have established a secure line of supply from Chichester's natural harbour. 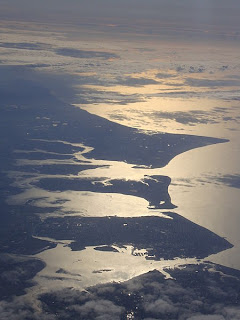 Chichester's natural harbour (photo: John Armagh). Fishbourne is at the end of the uppermost creek.

In the early days of my research for An Accidental King, I spent some time around the harbour, trying to see it through the eyes of a Roman commander. This particular commander (it may have been the future Emperor Vespasian) would have had his mind on logistics, not strategy. The fighting was taking place elsewhere. The harbour is a very different place at high and low tide. He would need to know the locations of the deep channels, for which local pilots would have been essential. The mud-flats at low tide are no place for horses or armoured men to be caught out. 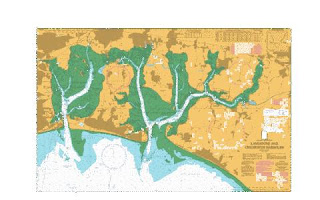 The areas shaded green on the map are open water when the tide is high, mud-flats when it is low.

This commander would have wanted deep-water jetties. Some might already have existed for trading purposes. If there had been prior contact between the Roman commander and Cogidubnus, more could have been constructed in advance. If not, the Roman engineers could probably have improvised them quite quickly.

Fishbourne Roman Palace is located at the end of the easternmost deep channel of the harbour. The deepest levels of the excavation, beneath the various phases of the palace itself, revealed the foundations of Roman military granaries, and this may be a pointer to the real significance of the harbour to the invasion plans. The invasion force is estimated to have required 50-70 tonnes of grain per day, almost all of which would need to be imported. It is unlikely that all of this came through Richborough. 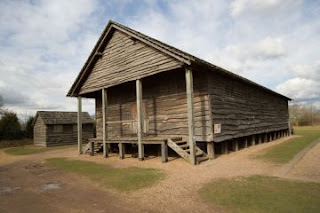 Reconstruction of a Roman legionary granary at The Lunt Roman Fort, near Coventry.

It is natural that Cassius Dio should have concentrated on the action taking place in Kent, and that he should have placed Vespasian (by then a god) at its centre. The reality may have been rather different.

Mark Patton's novels, Undreamed Shores, An Accidental King and Omphalos, are published by Crooked Cat Publications, and can be purchased from Amazon UK or Amazon USA.
Posted by Mark Patton at 05:30