"The Next Big Thing"

This questionnaire, entitled “The Next Big Thing,” seems to be doing the rounds on the internet (it was brought to my attention by fellow writer Nancy Bilyeau – http://nancybilyeau.blogspot.com), so I thought it would be interesting to answer the questions and introduce my next major writing project.


What is your working title of your book?


Where did the idea come from for the book?


When I was a child, growing up in Jersey, we used to take a two week holiday most years, spending the first week in the New Forest and the second week with my grandfather in East Sussex. My parents did everything they could to encourage my interest in archaeology and history and, since Fishbourne Roman Palace (near Chichester) was roughly midway on our journey, we generally stopped there. I must have been 8 years old when I first saw it, and immediately wanted to know more about it: why it was built, and who lived there. Since then I have studied and taught archaeology, but those questions have kept coming back to my mind.


What genre does your book fall under?


Which actors would you choose to play your characters in a movie rendition? Difficult to answer, since the book covers the events of four decades (43 AD-80 AD). Essentially, my protagonist, the client King, Tiberius Claudius Cogidubnus, looks back on his life from his late 60’s, so I’d love for that role to be played by Sir Ian McKellan. We might need to find someone else to play him in his younger days. It would be great for Sir Derek Jacobi to return to his earlier role as the Emperor Claudius, and for Sir Patrick Stewart to play Vespasian.


What is the one-sentence synopsis of your book?


Tiberius Claudius Cogidubnus, the pro-Roman client King of Southern Britain, looks back on his life and reign; at his friendship with the Emperor Claudius, and the future Emperor, Vespasian; at his attempts to maintain peace & prosperity in his kingdom, to prevent the Boudican Revolt (and, later, to limit its extent and deal with its aftermath); and at the shifting nature of the relationship between Britain and Rome.

Will your book be self-published or represented by an agency?


I don’t intend to self-publish. Whether or not it will be represented by an agency is subject to on-going discussions.

How long did it take you to write the first draft of your manuscript?


I think it took about a year (working full-time for around half of this) to write the first draft. It has taken me a further three years (working part-time) to get it to its current point (i.e. the submission stage – Draft 12), with professional assistance from The Literary Consultancy (www.literaryconsultancy.co.uk) and help, also, from an online critique group.


What other books would you compare this story to within your genre? It is written in the first person, so the obvious points of comparison are Robert Graves’s Claudius novels and Marguerite Yourcenar’s Memoirs of Hadrian, both of which I love. It is written, however, for a 21st Century readership, so the writing style is quite different. Also, the focus is specifically on Britain and, in this sense, it comes closer to Manda Scott’s Boudica Dreaming series, though told, of course, from the completely opposite point of view.


Who or what inspired you to write this book? Apart from my early visits to Fishbourne (which many archaeologists and historians believe to have been built for Cogidubnus by Vespasian), my subsequent academic studies and countless conversations with colleagues and students, I have frequently made connections with more recent events.


This, in one sense, is my response to 9/11. I can so easily imagine someone like Cogidubnus being seduced by elements of Roman culture (the architecture of the Forum – which my fictional Cogidubnus sees as a young man, the beauty of the written word in the poetry of Virgil & Ovid) in much the same way that, all over the world, people of my parents’ generation were seduced by aspects of American culture (Jazz, Rock & Roll, Hollywood, not to mention the charisma of politicians such as FDR and JFK). 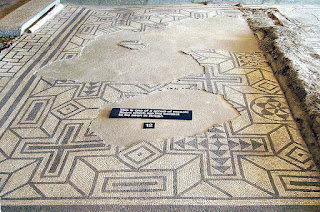 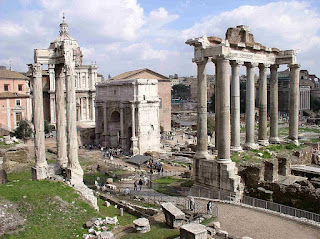 The Roman Forum, through which my fictional Cogidubnus rides alongside Vespasian, in the Triumph of the Emperor Claudius (photo: Carla Tavares).
The ancient mine-shaft on Iceni territory, where the protagonist is held hostage in the aftermath of the Boudican Revolt (photo: Ashley Dace).


The realisation of the unequal nature of the “special relationships” that arise from such a seduction comes later, and draws a variety of responses, which are not easy to reconcile.

What else about your book might pique the reader's interest?

The central part of the book gives a graphic account of the Boudican Revolt, from the perspective of its victims (most of whom would have been British, rather than “Roman” in the strict sense), and in a way which, I hope, has strong contemporary resonances.
Posted by Mark Patton at 05:27